Illuminating lectures have been a part of the Frick’s program since the institution’s founding, with its world-class concert program being introduced shortly thereafter. The Frick plan includes the creation of a purpose-built, state-of-the-art auditorium that will accommodate a range of programming, from concerts to spoken-word events.

In developing the design, Selldorf Architects is working in conjunction with the world’s leading acousticians from the firm Arup. The new auditorium, with its curvilinear form, will offer acoustics that naturally support both musical performances and spoken-word events. The design seeks to capture the characterful acoustics of the Music Room (which was created as a lecture hall in 1935 when the Frick residence was converted into a museum by John Russell Pope) while eliminating longstanding limitations of the space. The new auditorium will offer a sense of intimacy through its rounded form and curved raked seating plan, much like ancient Greek theaters, by bringing audiences closer to presenters/performers and by providing a sense of interconnection among patrons. The new auditorium will increase seating capacity from 147 to 220 to better accommodate the Frick’s often sold-out programs.

The new space will be supported by state-of-the-art control rooms, broadcast rooms, and recording studios, which will further allow the Frick to share its unique programming beyond the walls of the Collection and to a larger audience.

Located on the lower level, repurposing sub-cellar storage and mechanical spaces, both stage and seating will be easily reached by all visitors through new ADA-accessible elevators from the museum’s reception hall. The auditorium will be served by adjacent coatrooms, bathrooms, lobby, and pre-function spaces.

The area occupied by the existing lecture hall and concert hall, in turn, will be transformed into a main-floor gallery adjacent to the Frick’s collection galleries. The repurposed space will enable the museum to present special exhibitions without the need to take down works from its permanent collection, thereby enhancing the dialogue between works on loan and its holdings. The special exhibition gallery will retain the lecture hall/Music Room’s original carved wood doorways. This room will also be carefully documented by preservation architects Beyer Blinder Belle. 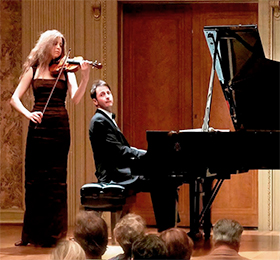 The Frick’s concerts have delighted listeners for more than 75 seasons with the finest in recitals, chamber groups, and early music ensembles; photo: Michael Bodycomb