By 1972, the Frick had purchased three parcels of land next to the museum on East 70th Street. The intention of the Trustees was to construct an addition that would solve mission-driven needs by housing a substantial auditorium, dedicated classrooms, and more spacious, up-to-date conservation facilities. In 1967, five years before purchasing the final parcel (the other two having been acquired in 1940 and 1946), the Frick commissioned renderings by Johnstone McMillin and Associates Architects of Pittsburgh for an expansion with a three-story addition fully occupying the three parcels. The Frick initially planned to install a terrace and a temporary garden on the lots to serve as placeholders for approximately ten to fifteen years, until funding for the project was secured and the architectural design refined.

Economically, the 1970s were not an easy time for The Frick Collection, or for the City of New York. The Frick at that time operated largely on the income generated by its endowment. The institution had no substantial fundraising infrastructure in place and lacked the level of foundation and corporate support it receives today. It also had only a modest membership program, which attracted a small coterie of devoted friends—a far cry from the thousands of individuals supporting the institution today. The national recession and stagnating stock market consequently made the prospect of a major expansion daunting.

The Frick chose John Barrington Bayley, working with Harry Van Dyke and G. Frederick Poehler, to design the pavilion as well as the back and side walls that would serve as a backdrop for the garden. Two years later, the Frick hired noted landscape architect Russell Page to design what came to be known as the 70th Street Garden. Page configured the composition of the garden, conceiving the arrangement of plantings and trees and designing the central fountain and paths.

The 1977 pavilion included two basement-level seminar rooms, a bookshop, and the reception hall. Soon after this addition was completed, the seminar rooms began to be used to present special exhibitions, as shown in the bottom image at right. Because of their low ceilings and modest scale, these rooms were limited to the presentation of small-scale objects. Special exhibitions of large-scale works, such as paintings, had to be presented in the first-floor galleries, causing works from the permanent collection to be removed from view. These lower-level rooms were neither contiguous to the museum’s first-floor galleries nor did they reflect the residential ambiance of the historic mansion. Furthermore, they were not purpose-built for exhibition use, but intended for education programs with a limited number of attendees. Access to them by the Frick’s exhibition-going audience via a staircase and narrow elevators was cumbersome.

The larger coat-check area in the reception hall (shown at the top of the page), with its narrow counter for acceptance and retrieval of coats, umbrellas, and bags, created one of several bottleneck encountered by visitors when entering the building.

Over forty years after the 1977 addition was completed, the Frick’s needs are no longer being satisfied. Read more about the institution’s growth in attendance, collections, public programs, and other education offerings, as well as the numbers served by the Frick Art Reference Library.

The goals of the master plan are addressed in the section called The Project as well as in the pages that follow. These include information relating to exhibition space, visitor access and services, education programs, and conservation.

“A small space to begin with, the reception hall is easily overwhelmed even during days of average attendance.” 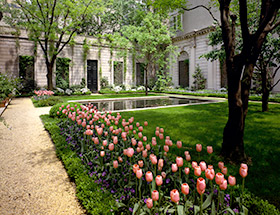 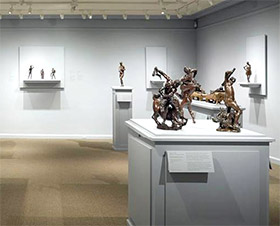 Lower-level temporary exhibition gallery in the basement of the 1977 addition; photo: Michael Bodycomb